On Our Adventure to Tel Aviv in the Biggest Storm Ever

Savyonne and I signed up to attend a conference on Migration Studies at Tel Aviv University this week. One of my interests is migration and I thought that this conference would be a great opportunity to hear new perspectives on the topic.

Tuesday morning, we woke up at 6:15am to catch the sherut to the train station and we were on time, even in the rain. If you didn't know, Israel has been experiencing a huge storm since the weekend. Torrential downpours, flooding, snow in Jerusalem, highway and road closures, buses not running. Well Tuesday turned out the be the worst day. We were lucky that we left so early because the train service was disrupted sometime while we were en route, but it didn't affect us. The streets were flooded, traffic was awful, and there seemed to be a river in the causeway built to direct the flow of water. There was so much that we saw the water almost spilling over those.

Despite the fact that we made it to the Tel Aviv University stop, we then had to navigate to the building for the conference in pouring rain. Our shoes soaked through while we had to dip under a fence to make it to the building we needed to. Finally, we arrived, but apparently lots of other people hadn't due to the weather, and we had tea and rugalach until they started nearly 1.5 hours late.

The conference itself was hit or miss. There were a few sessions we thought were interesting, but the conclusions weren't anything groundbreaking. Working on the ground in communities, these are things you would know without needing to do peer-reviewed studies. Savyonne and I agreed that there was a disconnect between the academic world and what was actually happening. And it seemed to me that the policy implications of the research was an after thought. My question kept being, who cares and why is this relevant at all? There were a few topics that were unique, but overall, we both had a hard time feeling engaged. The conference definitely made me realize I don't want to be a sociologist (don't worry, Mom and Dad, that was never an actual goal of mine).

I think the biggest influence the conference had on me was the realization that being present and working on the ground is much more impactful and satisfying, and that the work we do as part of the Yahel program or in my future as a nonprofit professional must center around the people and the reality of how life works. Knowledge is great, but you have to know how and where to use it effectively.

We eventually made it back to Gedera, after spending the night with a previous Yahel participant (and hearing about her experience). The great thing about this storm has been the rainbows. I saw one last weekend and another again yesterday and they are absolutely gorgeous. Below is one from behind our apartment yesterday. 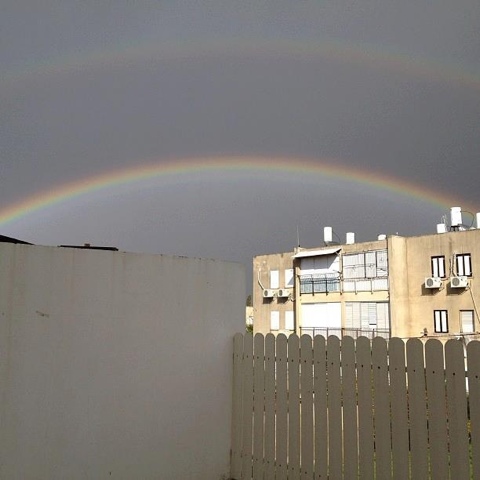